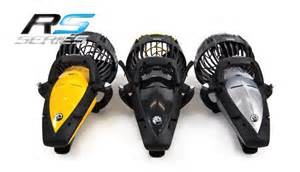 Just incredible. There is nothing ordinary about the way the new Sea-Doo Seascooter RS Series looks or functions. With power nearly twice that of the previous generation of seascooters, the 200 Watt, 300 Watt and 500 Watt power options of the new Seascooter RS-1, RS-2 and RS-3 easily out powers the competition. With multiple transmission speeds, the new RS Series can effortlessly propel you from a crawl to over 4mph.

With its long lasting environmentally friendly LI-ION battery system, you'll not only enjoy the benefits of its lighter weight and longer run times, but you'll reap the added extra of double the lifespan of traditional seascooter batteries and super quick recharging. The RS-3 features a 4ah battery, the RS-2 features a 8ah battery and the RS-1 features a exteneded run 12ah battery and best of all you can interchange and upgrade the battery with any Seascooter in the RS Series. The Sea-Doo RS Series batteries can be found on our batteries page. Also, this new technology allows for the battery to be recharged while in the unit.

Messing with bouncy to get it just right is a thing of the past with the new Seadoo sea scooter RS Series. The RS Series features a self-filling ballast hull to automatically achieve neutral buoyancy almost instantly. The Seascooter™ RS nose cone allows water to freely enter and exit the ballast space allowing the Sea-Doo Seascooter™ RS the ability to become neutral buoyant when submerged, and expel water as soon as it hits the surface.